No matter what anyone tells you, your beginning is spectacularly important. No pressure or anything, but if a reader doesn’t gel with your first line, your second must be amazing.  The general rule of thumb is, the further a reader is expected to go to find the story, the easier it will be to lose them.

Starting a book can seem a bit like a rocky, uphill struggle - but it's worth it! 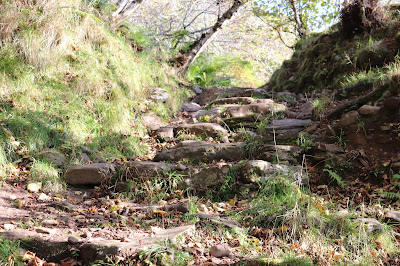 One of the most well-known beginnings:

In the beginning was the word

It’s difficult to rival that one!

But it’s a statement of truth (let’s leave fact out of it, as most of use NaNoWriMo writers are in the business of fiction), and that’s what most of my first lines are.

Petrovia Lodge was all that could be expected of a country house for a family of a not inconsiderable income.
Day’s Dying Glory

In a country at peace, men of war are confined to their homes and families.
Beneath Black Clouds and White

The springy heather underfoot was the only thing which coaxed on the faltering footfalls of the tartan-clad man as he stumbled forward.
Caledon

‘The gule block is almost spent,’ a delicate voice announced from the curtained archway, the first sound of the new year.
The Year We Lived

All of these set the mood and paint a picture in the reader’s mind.  They also serve to establish the voice for the rest of the story to come.  The most important thing is to make sure your opening line is true to the rest of the book, and that it doesn’t just fill a space on your blank Scrivener page.

Remember, this is not so much your hook as your bait, you want to make it irresistible to your target audience.

And it’s not just your first line.  Everything in your first chapter wants to lay the groundwork for the adventure which is going to unfold, whether that is focussing on one character so your reader gets to really appreciate and emphasise with them, or introducing a whole host of them to create the image of a busy confusion.  Once you’ve got this foundation laid, your story will begin telling itself, you’re just a tool for the telling!

Here are a couple of things to think about in the opening pages of your novel: