In my world, this is one of those necessary evils. Writing dialogue is a bit of a poisoned chalice. Do you go for how people really talk? Or do you go for how people can read and understand it? My lasting memory of Wuthering Heights is the use of a written-in Yorkshire accent, whereas most people remember the story! Perhaps because of this, dialogue is something I've always felt strongly about! 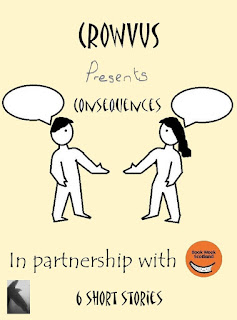 Dialogue tells your reader a great deal about the character. For last year's Book Week Scotland, Crowvus hosted an event called Consequences, in which other people gave you your characters  through their own words (it's free to read here!). One of the toughest things about it was fitting in the words your characters had to say. After all, writing a story with a man and a woman in a place with a certain ending - that's pretty vague. But as soon as the words were introduced, the vague characters became 3D: you could hear their voices.

As soon as you talk to someone, you can get an idea of who they are - much more than looking at them. Your characters want to be just the same. Most writers only use a couple of "Points Of View" in their writing. This means dialogue is the strongest way of ensuring character development for the other players in your books.

Here are a few things to bear in mind: