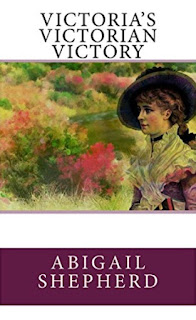 I really enjoyed this book! It was about a subject that I'm really interested in - I love old-style farming. In fact, Mum and I love to snuggle up in front of an episode of "Victorian Farm". The fact that the story was engaging and very well written, on top of this, meant that I could very easily go back and read the whole book again!


Vicky was very well developed throughout the book. I can't say I particularly liked her all the way through, but this made her human. I identified quite a bit with Mary-Anne and could see myself in some of her characteristics.


Weirdly enough, I imagined the farm somewhere in Devon. I can't remember if it says where it is set – I think it was the strawberries! And the weather!


My wish was that the ending could have been longer. By the end of the book, I felt like I knew the characters well and I would have liked maybe one more chapter of them settling into the new way of things. Maybe I’m just being greedy, but I was quite disappointed when my kindle told me I’d come to the end of the book.

Overall, this was a great book that I really enjoyed! I would certainly recommend it to others, especially those fans of “Victorian Farm”. I may even persuade my Mum to read it!

I just remembered something that really caught my attention! The book is historically accurate, even down to the little tiny details. One small part of the book mentions that the room that had been used by the live-in servant was now being used to store apples. This really interested me as I was talking to my Grandma last week - she was telling us about her friend who had a room in the attic which used to be a servant's bedroom but was later used as a storeroom for the farm's fruit. Little things!!


Fourteen year old Victoria Bloom is great at having ideas, but they don't always go to plan. Now her mistakes will have bigger consequences than ever before as it has fallen to her to run the family farm. With harvest season fast approaching, it's urgent she makes it profitable again, or they will lose it altogether.

An entertaining yet educational historical read designed primarily for girls between the ages of 10-14.