July 30, 2020
Thank you Judith Crow for writing this book review. 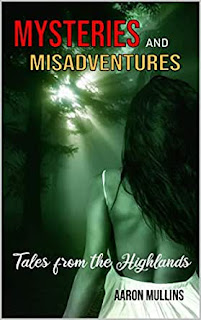 Mysteries and Misadventure - Tales from the Highlands by Aaron Mullins

I do like short stories. There’s just something about having the option to dive into a book for five minutes and emerge having completed an entire story.

Aaron Mullins' Mysteries and Misadventures is a collection of short stories which are inspired by the area we live in. It always helps when you can put yourself in the place where the stories are set but, never fear, Aaron has a genuine gift for descriptive writing which allows people from any place to put themselves in the settings he skilfully creates.

I regularly do the “first read” of the Crowvus Christmas Ghost Story competition, meaning that I can be reading over a hundred supernatural stories in a very short space of time. That makes me choosy and means I come at any such stories with a very critical eye. Mysteries and Misadventures does stand up well in this light. Again, that descriptive writing is what really brings the tales to life: so important in a short story.

I am slightly less convinced by his dialogue. I’m very pernickety when it comes to dialogue and Aaron does create things very well, there are just a few moments where the authenticity slips slightly, or the use of the Caithness dialect* doesn’t quite ring true.

The book begins with a well-written, gripping ghost story which is a Caithnessian take on the Vanishing Hitchhiker tale. One thing that gives Aaron Mullins a definite edge in his stories is that he is a psychologist by trade and his characters, even in the very short stories, have a depth that some authors fail to create in an entire novel. For the best example of this, read his third story in the book: Equal To and Greater Than. It should be compulsory reading for anyone working in a High School setting.

In Mysteries and Misadventures, Aaron's masterful use of descriptive writing brings each story to like, providing the opportunity to explore a collection of short stories from a part of the world where myth and magic are still very much alive. His expert grasp of human psychology makes it appear perfectly logical that the supernatural could easily collide with the modern-day.

* Caithness dialect is tricky – take that from an incomer! There are words that mean something slightly different from one end of the county to the other (ask anyone from Wick what a “scorrie” is and they’ll point you to a seagull; ask someone from another part of Caithness and they’ll tell you that a gull’s only a scorrie for as long as it’s got its juvenile feathers). The result of this is that there are tweaks I would have made as a “Weeker” that are probably fine for someone in Thurso.

Easily worth the 4 stars!
You can buy Mysteries and Misadventures here: https://www.amazon.co.uk/Mysteries-Misadventures-Highlands-Aaron-Mullins-ebook/dp/B087QVNGWY
and learn more about the author here: https://aaronmullins.com/
---
Shameless plug for our Ghost Story Competition!
You have until the 30th September to send us your ghost story (up to 4000 words) to be in with a chance of winning! Check out the details on our website: www.crowvus.com
Stuck for inspiration? Have a look at our video for the 4th annual ghost story competition here: