When The Inspiration Runs Out - an #AuthorOfTheWeek blog

May 01, 2020
During my #AuthorOfTheWeek interview, I mentioned (amongst a lot of other things) that the lockdown has challenged my focus with writing. I've begun several things which have been fated to end up on the back-burner or just completely discarded.

The truth is, when all those other things I'm mentioned so far this week fail to inspire me, there's one last-ditch attempt I have of getting writing. And that rests with a very significant group of people: my characters.

I have a terrible - but incredibly rewarding - habit of allowing my characters the gift of Free Will. Sometimes they resist, sometimes they run wild, and then on other occasions they actually dictate the next development. I have utmost respect for each one of them, goodies and baddies, men and women, human and inhuman. Why? Because when I've completely run out of steam, they're the ones who make the story their own.

I've had some great feedback on my characters, but one of the things which caused me the greatest pride in my character development was this: 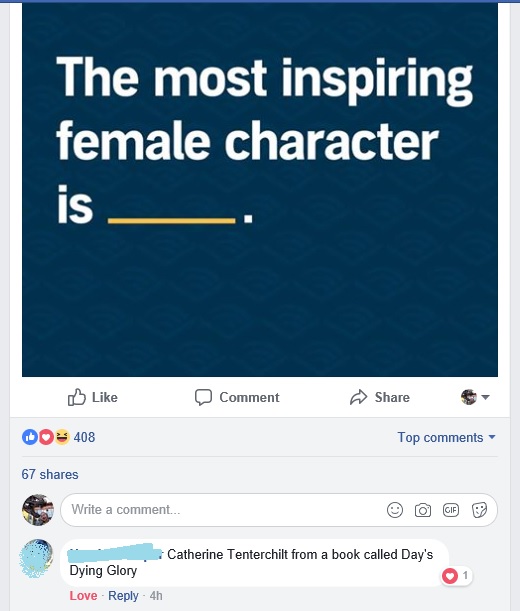 Wow! Someone had not only listed my character and, therefore, my creation as their favourite, they'd actually listed her as an inspiration!

To me, the thought of writing a book with characters who are anything less than acquaintances of the author is just unthinkable! I class most of mine as friends. I don't like books where you can't connect to any of the characters, so why should I expect my readers to feel any different? Recently, I wrote a short story for a fantasy competition and, on finishing, I felt so bereft I had to go and draw them! A lot of my artwork tends to be story-related, probably because of my characters' inspiration once again!

Here's a series of sketches I did for Caledon depicting the Eile.


I've laughed with my characters and cried with them, too. I consider one of my greatest accomplishments in writing to be the fact one of may readers cried when a character died. What a connection they must have felt! And I began to believe people when they praised my characters.

It's no exaggeration to say that Beneath Black Clouds and White was built on two things in Day's Dying Glory. One was a throwaway remark made by a character, utterly coincidental and barely relating to the plot of the first book. The second was a quirky habit I gave a different character. From these two things (as well as the history I had briefly explored in Day's Dying Glory), my prequel was born!

That's how much freedom I grant them!

And, let's face it, the reader will hear their story far better if I let them run wild - so go right ahead, Characters!