People Who Inspire - An #AuthorOfTheWeek Blog

April 29, 2020
So far this week I've shared with you some places and some things which have been a source of inspiration for me. Today, I'm going to share some people who have inspired me. Some of these people are not what I would call heroes, but are people whose stories have touched my own and, in some cases, whose work I hope to continue and honour with my own writings.

I unashamedly have an obsessive nature. If I uncover a new person (usually someone from deep in the realms of history!) I want to know all I can about them. There have been several occasions when I've deviated from the research I was meant to be doing, and click through a series of links until I find myself researching someone who I have no idea how I even found them! The back button is very useful for this!

One good example of this was when I was researching for a book which is coming out next year, called The Year We Lived, which is set just after the Norman conquest. Most of my characters who are erroneously called Normans are actually Burgundian (something crucial to the plot, so no spoilers about why!) but everyone seemed to be called William. This got spectacularly confusing and, in the end, I had to write down an elaborate family tree so that I could see which William was which, how they were related, as well as how they linked in with the rest of the hierarchy. Talk about chasing your tale! [pun intended]

Here are a few people who I've been inspired by in the course of my writing... 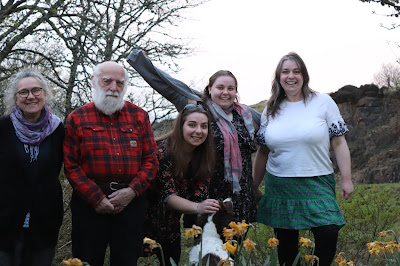 First and foremost: my family. Not just the ones who are here on this photo, although these are the ones who live with me, so perhaps these folk a little bit more! And, of course, Orlando the Sprocker Spaniel, on whom Gulliver in Beneath Black Clouds and White is based.
These lot are my inspiration in every sense of the word. 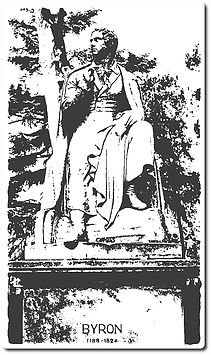 It can come as no surprise to anyone that this chap appears on the list!
I know they're frequently belittled, both at the time and more recently, but I really love his early poems. As a person, he remains something of an oxymoron to me, an individual for whom I feel utmost pity, even when his behaviour was inexcusable, perhaps more so then.
His poem, Lachin y Gair, was of course a huge inspiration to Day's Dying Glory, and his peculiar personality has contributed to countless characters in my writing.
Incidentally, I'm convinced, although I'm sure others would strongly disagree, that Byron thoroughly hated himself. And that, as he careered from scandal to scandal, it only allowed him to become more like the person people expected him to be, and who he had convinced himself - by popular opinion - he should be.

Something of a legend the world over. John Newton's life had it all. I've seen and read various accounts of different times in his life. It's easy to become sidetracked by his conversion and later vocation but, as with many of his contemporaries, we can lose the full worth of their political and religious zeal if we don't explore the events and people they were before.
John Newton's philosophy is central to the main characters in Beneath Black Clouds and White, and many of Fotherby's exchanges with Manny in the book are taken from experiences of which Newton had spoken or written.

And then we have those who try and try and - quite literally - die trying!
Thomas Douglas could be labelled 'eternally hopeful', 'cockeyed optimist', 'starry-eyed dreamer' - take your pick! From being kidnapped by pirates as a child (only to be returned a few days later!), to tricking the bailiffs into using his schemes to re-home the cleared population, to his utter ruin through his hopes to improve the lives of all people. He is almost a Dickensian tragedy!
Most of my books feature someone like him. Someone who, against all odds and likelihood (Thomas was his father's 7th son and never expected to inherit) end up with a position for which they are wholly unprepared and unsuited. There is a great deal of Thomas Douglas in the oldest and youngest Portlands in my historical fiction books, as they always view the world through a rose-tinted lens, and carry the same belief that they can make everything right for those less fortunate. 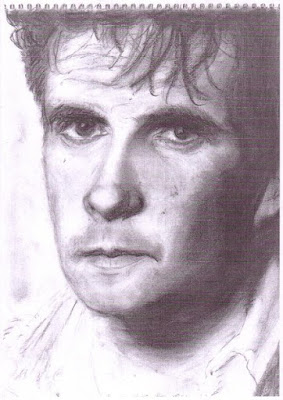 Turning from historical figures, I have to mention those who are an inspiration as I actually write. Like most authors, I have a soundtrack of music which I tend to listen to while I'm writing. A lot of it is instrumental music. I usually find I end up writing the words of a song if I'm listening to it while I'm writing - but quite honestly I could listen to Donnie Munro singing virtually anything and be inspired.
I won't bore you with my reasoning, but I will say that - if you've never heard him sing, or even if you have - listen to him singing any of Runrig's, or his own, ballads, then you'll understand!

There are several other people who have inspired me, often people I have met in my day-to-day life, but they may not thank me for listing them on here. As much as possible I try to tell the story of ordinary people living extraordinary lives. We all have an adventure to share, and that adventure is life. Sometimes it seems dull and some people even question the worth of it, but as long as our lives can touch the lives of others in a positive way, we can be an inspiration. After all, that's all the people in the pictures above did.