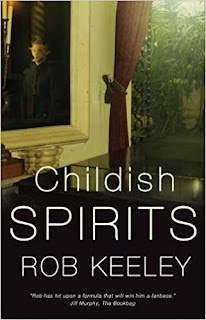 "When Ellie and her family move into Inchwood Manor, Ellie quickly discovers strange things are happening. Who is the mysterious boy at the window? What secrets lie within the abandoned nursery? Who is the woman who haunts Ellie's dreams - and why has she returned to the Manor, after more than a century? Ellie finds herself entangled in a Victorian mystery of ghosts and tunnels and secret documents - and discovers that life all those years ago isn't so different from the world she knows today...Rob Keeley's first novel for children brings out all the ingredients of the classic ghost story within a recognisable modern world setting. Readers of his short story collections for children will find in Childish Spirits the elements which made his past books such a success - strong and contemporary characters, inventive twists on traditional themes, and a winning combination of action, suspense and humour."

I was sent a copy of this book in return for an honest review.

Although, because of other commitments, it took me about 4 months to pick up this book, once I started, I couldn't put it down. I read it in 4 hours and my eyes were glued to every page.

While it is a children's novel, there were some parts that were quite scary, especially for children. There's nothing wrong with a bit of grit in any book, however, and the suspense and threat was welcome to the story-line.

The book is a ghost story, starting with that age-old beginning of moving house. New house...new explorations...new adventures. It's a tried and tested start and I have nothing against using what is known to work.

The story, however, soon takes on a slant of its own as we are introduced to Edward, a character who I found I did not warm to initially. It's odd for a main character in a children's book to be an insufferable antagonist but his misdemeanours were softened by Ellie's responsibility and sense. Perhaps that's the teacher in me speaking, but I admit I felt a little sorry for the governess. But...hush...I can't say much more about this or I'll be giving a major plot-line away.

The introduction of another character - a sinister character (interestingly, an adult) - brings a much darker tone to the story. The mystery that accompanies her leaves you on the edge of your seat and we share Ellie's confusion at events that unfold. The darkness continues and grows until the climatic point when the truth is revealed!

This well written book reminded me a lot of growing up as I had an imaginary friend who was a ghost. Tom, he was called, and he was about the same age as Edward. Looking back with an adult's mind, Tom was probably an attempt for me to make the spooky, haunted house we lived in a little less intimidating. That being said, this book gave me a warming, tingling feeling as I was transported back to that time.

The only reason the book does not receive 5 stars is because there were little things (seemingly insignificant things) that I did not understand. When I read stories when the author is sitting in the same room, the poor writer is bombarded with questions..."How come this character got there so quickly?" or "Where was he at this time?"

Without giving the ending away, I couldn't help but feel that Ellie was gravely irresponsible for the actions she took, in regard to her mother and brother. If I was either of them, Ellie wouldn't just be grounded for the week...she would not be allowed out of the house until Christmas!

Overall, however, this was very enjoyable and I will be keeping this in mind when I choose next year's class novel! I would recommend it to any primary teacher - children love ghosts!