April 21, 2020
In the beautiful photo album that my mum and dad gave me for my 21st birthday (although I should give an extra grateful nod to Mum, as I’m quite sure she put it together!), there is a single sheet of paper.

It’s that thin, cream coloured paper which looks almost like it’s what people print receipts on and, with the passage of time or just the poor quality printing, you have to squint slightly to make out what is printed on it. 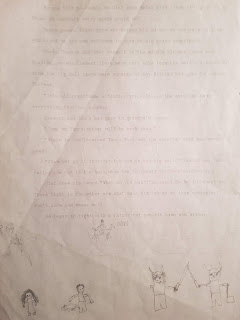 It is, in fact, the oldest of my stories. A wonderful little story about Vikings, which includes fabulous lines such as: 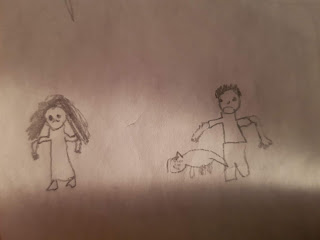 I would have been about seven when I wrote the story, a year or two younger than the children I am teaching at the moment. I remember writing another one about someone who grew up and went away to university, where I mixed up the words “sure” and “sore”, leading to a lot of hilarity from my eldest sister.

It is easy to look at the poor story as a cautionary tale: Here There Be Dragons, And Really, Really Awful Writing.

But, to be fair, it was written by a seven-year-old.

I take the same approach when I redraft something for the first time. All I’m bothered about in the beginning is having a story down on paper. Once that’s done, I’ll sometimes hand it on to two of my sisters for reading, then I’ll attack it viciously with a coloured pen. I love pens. This morning, I bought a set of purple, pink and blue pens from Tesco for only 38p. Bic no less! It made my day!

I usually keep that first draft somewhere, hidden away, in case (of course) I ever become famous and can sells it for millions. I wonder if JK Rowling has a pen-riddled draft of Harry Potter and the Philosopher’s Stone, where the writing is almost unrecognisably bad but the plot and characters show the skeleton and sinew of the story. 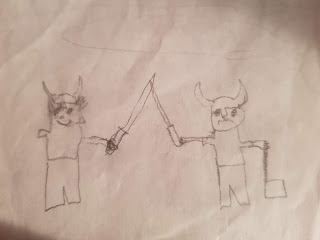 I haven’t got the heart to scribble all over the two page story about Olaf and Thora. They are characters of innocence and they don’t deserve a nearly-thirty-year-old to attack them with bright pink comments about how bits don’t make sense and where-on-earth-did-that-character-come-from?!

Matthew and Alexander, however, which I finished back in February, has no such excuse. It just has to wait until I have time to burn it with the Editing Pen so that, like a phoenix, it can rise from the ashes and become something beautiful.

Or that’s the theory, anyway.