There’s nothing like a global pandemic to make you appreciate the life you had before. Without the freedom to roam around Scotland, my debut book would never have happened. And I’m grateful to this day that it was done and dusted before Covid struck. The fact I’ve been unable to travel the country again to launch Craggy the Coo Wants a Place to Call Home is a trifling inconvenience in the great scheme of what we’ve all endured over the past 13 months or so.

I’ve been asked how I picked the places that Craggy travels to in the course of his journey. If I’m honest, they really picked themselves, based on where I happened to be or personally chose to visit in the 18 months or so it took me to put the book together.

So let’s start at the start. The first picture I ever took of Craggy on location was in the village of Rockcliffe, Dumfries and Galloway in January 2018. That stretch of the Solway coastline brings back magical memories from my childhood when, to quote one of my favourite authors – the late and sorely-missed Iain Banks – in his classic, The Crow Road, “every day was a week, each month a year. A season was a decade, and every year a life.” I spent a lot of time in the area with my aunt, uncle, cousins and grandparents and I hadn’t visited for decades. Given that it was relatively short drive from my family home in Langholm, I was delighted to return to that special part of my early years to bring out the inner bairn that would be needed to make the book work. The Rockcliffe photo accompanies the first verse of Craggy’s story.

While I’m a country boy at heart, I have family just outside Edinburgh and friends in Glasgow I like to visit, so it seemed apt that the wee coo got a taste of city life before deciding it wasn’t his cup of tea. I was blessed with glorious weather in both locations, and I’m glad I packed Craggy in my bag when I dropped by!

Glasgow serves as the starting point of many a trip by train up the west coast, and so it was natural that Craggy accompanied me to one of my favourite spots in the whole of Scotland, the Isle of Lunga in the Treshnish archipelago off Mull. Here, you can picnic amongst the abundant puffins, who see humans as a deterrent to their natural predators (greater black-backed gulls and skuas) and are more than happy to spend time in our company. They were similarly tolerant of Craggy, which was handy for the purposes of the story!

Mull’s capital Tobermory is one of a few starting points for expeditions to the Treshnish Isles so I thought it only right that a new generation of children become familiar with a village that inspired the previous one, thanks to its starring role in the BBC’s Balamory.

Further north, the wilds of Assynt were a part of the world I visited frequently in my roaring twenties, when groups of us would hire a cottage over the New Year break and split our time between wild weather walks and even wilder nights playing board games as gales, hail and snow battered the windows. I was reintroduced to this magical part of the world by my dear friend and ex-colleague Ali, who visits the village of Lochinver twice a year, in April and September. A new-found appreciation for Assynt in more clement conditions swiftly took hold, and Craggy pays a visit to two of the area’s most celebrated sights. 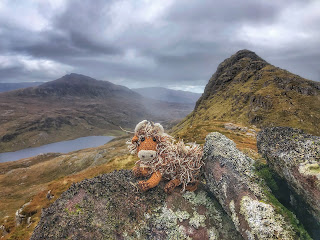 No tour around Scotland would be complete without featuring some of our country’s most iconic locations, necessitating a stop in South Queensferry to admire the Victorian engineering marvel that is the Forth Bridge, and a trip with Jacobite Cruises up Loch Ness from Fort Augustus in search of the elusive monster. *SPOILER ALERT* Craggy didn’t find her.

And the book is quite literally book-ended by photos from the Isle of Skye which, while now an arguably over-trodden part of the tourism trail, is somewhere very dear to me. I lived there as a little lad and my dad’s side of the family hails from the crofting community of Braes, south of Portree. All of my favourite childhood holidays were spent on the island, long before the days of the bridge, and it’s somewhere I still gravitate back to (and where I can still find places to avoid the swarms of visitors).

Craggy’s final stop in the story is left suitably vague but, since you’ve stuck around to read this post from top to bottom, I’ll let you into a secret. The location where our hero receives a warm welcome from a fellow coo is near Port Ellen on the island of Islay. I lived in nearby Bowmore between the ages of six and 15, and feel absolutely blessed to have called it home. That Craggy felt the same excitement to settle there is only natural.

Join in Craggy's book launch by ordering the book from the Crowvus store here!