When people say they’re doing something “on the hoof”, it generally implies they’re making it up as they go along. When it came to writing my first book, I did so on the hoof in more ways than one. 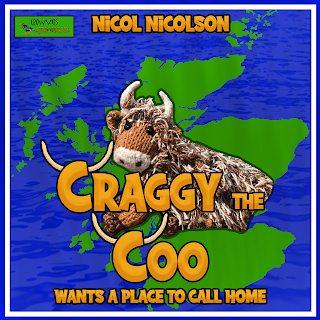 The photos that feature in Craggy the Coo Wants a Place to Call Home were snapped all over Scotland, from the top of mountains to the surface of Loch Ness. But the words that accompany the pictures were largely concocted near my hometown of Langholm in Dumfries and Galloway. I’m relatively notorious in these parts for embarking on epic walks of 20-30 miles around the surrounding hills. And while most people would carry their phone to chart their route or maybe listen to music, I used mine to put words to my pictures.

Having all the photos of Craggy’s travels on my iPhone meant I could weave a clear narrative together based on where he happened to be, and what could be seen in each image. So I would set off on a long walk armed with all I needed to create the verses and his direction of travel (while obviously keeping an eye on my own). The “Notes” app became my answer to a Victorian typewriter, with the added bonus that I was able to delete big chunks of text with ease when I’d thought of something better.

The fresh, crisp air and the rolling hill scenery around Langholm also acted as an inspiration for the book’s message – that no matter where you travel and the sights you behold, you’ll know when you’ve found somewhere you are happy to call home. As I piled on the miles, I also created ever-more content, which was eventually distilled into the product that’s being released this week.

For as long as writing has existed, those putting their thoughts down on cave walls, parchment or paper have been stimulated by their surroundings. I’ve been very fortunate with Craggy in the sense that not only have I been able to take the cuddly coo to some of my favourite places around the country – I’ve been able to immerse myself in glorious Scottish countryside as I’ve put the pieces of his journey together.

I can safely say that writer’s block was never an issue in the undertaking of book one. And I’ll just need to ensure that I keep writing “on the hoof” in the great Scottish outdoors when the day arrives that I embark on a sequel.