Places of Inspiration - an #AuthorOfTheWeek blog

April 27, 2020
During this coronavirus craziness, it can seem almost impossible to remember the places we've been to. We have a slideshow of photographs which come up on our computer and looking at them now is like seeing a different world.

Isn't that how it is with writing anyway? We find a place which speaks to us and, not only while we're there but every time our imagination transports us back, we move into another world. Invariably, because of the genre I write, I head back to another time, too.

Bear with me as I take you on a little journey through a few of the places which have brought me great inspiration... 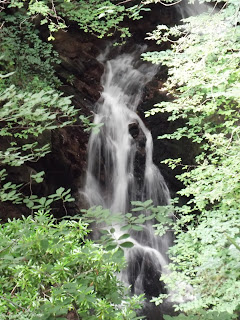 I don't know how many times we'd driven past the little sign for The Big Burn. It's an oddly insignificant little walk, but there is a waterfall there which you can walk up and over. Standing back a little bit, on that first walk we took there, I was struck by how strangely human it looked. The picture above was how I first met the waterfall, its spindly arms and cascading fingers.

And it occurred to me - if I saw a person there, why wouldn't someone else...? And what powers could a living waterfall have and present...? Ideas were jumbling around in my head as we journeyed home.

Ultimately, the waterfall became "The Souce" in Caledon, the voice of Caledon's spirit. I wrote the waterfall as I imagined it would be, neither male nor female, eternal but ever-changing. On that, I was right. The last time I went - a couple of years ago now - the waterfall looked like the picture below. It was hardly human, and was difficult to see from the same viewpoint. I didn't mind, though. If anything, it just made me consider how lucky I'd been to see it in its human appearance. Who knows, perhaps the myth of Caledon is true. And, having see it, I could be the eighth incarnation! [You can find a short story about the 8th incarnation in this free eBook.] 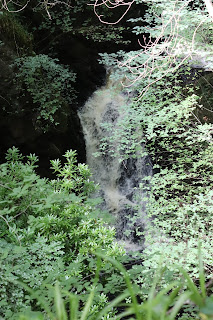 In 2013, I took a solo trip to Germany, and organised myself a little mini-tour. It was one of those things which I am exceptionally proud of but, looking back, I wonder how on earth I was brave enough to do it!

It was only a short tour - a couple of nights in Berlin, the same in Leipzig, Dresden, Nuremberg and Munich. By the time I'd got to Munich I was feeling pretty peaky, and had an interesting series of events trying to get home. But that's a story for another time!

I went off, armed with my travel journal, and in Dresden words just flowed! There was a trumpet player outside the opera house, busking with all sorts of tunes. There were little horse-drawn carriages like you get in lots of tourist cities. And there were busy tourists passing down the cobbled streets. I lay on my hotel bed and wrote and wrote and wrote some more. Such a collection of sounds, and the olde worlde atmosphere they invoked was unlike anything I'd heard before - or since. 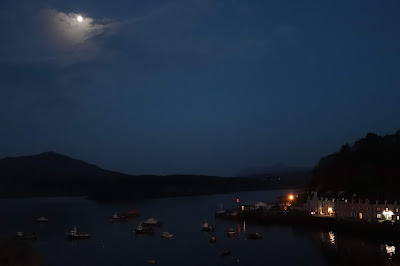 I've always known I wanted to travel. Reaching far back into my childhood, I remember staring at the vapour trails which crisscrossed overhead, or imagining where the road would take me if I went right instead of left.

But, growing up in a landscape which stretched over the ocean, boats have always been a near-mystical vehicle to me. Orkney has been built on boat travel, and all those stories fuelled my imagination.

We properly visited Skye for the first time last year - although Judith and I did once have a slightly crazy visit, during the course of which we found we were temporarily homeless. But one of the most captivating moments of our visit to Skye was an impromptu trip to Portree, where I took this picture. There is something very tantalising about the bobbing boats on the water, and imagining all the other boats which had come and gone from that bay.

The world looks magical in moonlight, and one thing it pointed out to me was how clearly the landscape showed up in that pallid light.

There are many others places, too many to mention. But these happened to be the ones I had pictures for!

When all this lockdown and social distancing is over, and we're free to explore the world again, go out and look for something beyond the surface. Or close your eyes and listen to the sounds of the world as they wrap you up. Or sail away on the promise of adventure, past, present or future.

Writing locations is an immersive experience. I don't believe you have to have been somewhere to write about it, but I do believe you do your best writing when you have been.

What do you think?