Violet write Young Adult books, and is a published author at age 16! Not only that, but her book "School of Secrets" gets wonderful reviews on Amazon. Check out the links at the end of the interview! 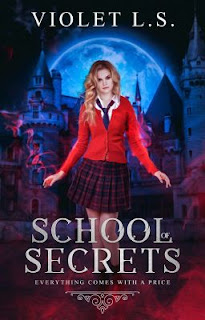 
Willow Adair is given the chance to lead a new life, but everything comes with a price.

Hallows Island is home to the most elite Supernatural school in the country, Westwood Academy. For Willow Adair, her acceptance into the school is a chance for her to escape her hateful coven and possibly learn more about her dangerous powers. But upon her arrival, Willow realizes that the school has secrets, ones that might be more dangerous than Hers.

While dealing with a Supernatural social ladder, a possible love interest, and keeping her friends at arm's length, Willow will also have to solve the killings of several girls who hold a shocking resemblance to her. She's sure whoever's killing them is coming after her next, but to stop them she may need to trust her new friends. Discovering the secrets of her new home will come with a price, one she may not be able to pay.

In a 5 star review of “School of Secrets”, you were commended for writing “very interesting characters”. How do you plan out your characters before you start writing? Do you have any tips for other authors on how to create characters?

For me, any characters I've created are from pieces of people I know. For Lea, part of her is my mom and another part is my best friend. I think when you create your characters, you don't always have to sit down and write out every little detail about them. When I set out to write School of Secrets, I wrote down important conversations I knew would happen somewhere in the book. For Lea, I wrote out how she would respond to finding out Willow's secret. For Taylor is was their romantic confession.

For anyone looking to start their first novel, the only tip I can give you is to just write the characters. Don't worry so much on who they are, but how they react to your story.

So, “School of Secrets” is written in the first person? What made you choose this method?First person has always been sort of a default point of view for most of my writing, and when I started School of Secrets I was 13 years old- I didn't even think about using a different POV. When I set about revising it I was initially going to try for third person but ultimately thought first person was a better fit with secrets being a major theme of the trilogy.

Writing a trilogy is harder than people think, particularly (I find) the middle book. What advice can you give to authors on how to make the middle book interesting and engaging, while keeping the audience on tenterhooks for the third and final instalment?
I didn't even know how difficult the middle book of a trilogy could be, and I had assumed it would be a cake walk. I'm only realizing now how wrong I was. Starting World of Lies (the second book) has been a rollercoaster of frustration and a little hopelessness if I'm honest. To anyone looking to write their own trilogy I would say make the second book about the characters.

The only way I know how to explain this is with a little cooking analogy;
While you do want to keep the big conflict on the stove, leave it on the back burner and simmer it. Make you second book a way to bring the action and suspense in your story to a boil, and add a little flavor to your characters. I find that typically in the first book it's harder to get in the personality and characters of your stories completely.

If you were an animal, what would you be?
This is easy! A giraffe, of course. I get to be tall and gentle with the ability to kick people in the face if they annoy me. And plus, who doesn't like giraffes?

Your front covers really stand out from the crowd! Do you design these yourself?
I wish! While I am working on my graphic design skills, I had the lovely 'germancreative' on fiverr design my cover.

Well, it was bound to come up at some point! So, you’re 16, and you’ve published your first novel! That’s incredibly impressive. What advice would you give to young writers who are wanting to follow in your footsteps, and publish their own work?
Thank you! Honestly what I always tell people who ask me is that you just have to do it. I spent so many of my teenage years writing but unable to really write because I was afraid. I was terrified that I would be 'too young' or 'not good enough' and to tell you the truth, when I had to go back and edit what I had originally written for School of Secrets I was tempted to toss it in the trash.

Instead, I sat down and rewrote the entire book in two months. (I refuse to ever let that original copy see the light of day). I stopped telling myself It wouldn't be good enough and started to remind myself why I even want to write at all.

So to any young writers, in the words of the great Shia LaBeouf," just do it".

When can we expect to see your next book on the shelves? Can you give us a glimpse of what is to come?
Good question- I'm hoping it doesn't take another three years for the sequel! I'm estimating a completion date for 'World of Lies' in August- if I can get my act together.

As for a sneak peak? All I can say is that some people are not who they appear to be...

Well, I don't know about you, but that interview has sold it for me. I might head on over to Amazon, and purchase "School of Secrets"!
If you'd like to do the same, the link is
https://www.amazon.co.uk/School-Secrets-Westwood-Trilogy-Book-ebook/dp/B08512GQMB

If you want to find out more about this seriously awesome author, check out her Twitter, and website
https://twitter.com/_Violet_Smith
https://vs20363.wixsite.com/mysite

Thank you, Violet, for taking part in this #IndieApril interview. I'm sure we'll see more of you as you write more books, and do get that next book finished! Don't keep your fans waiting! :)

Tomorrow, we will be hearing from Ryan Clark, who works for Gibson's Bookstore!

Crowvus is currently looking for a blogger who would like to do a cover reveal for Virginia Crow's new thriller "Among These Dark Satanic Mills". The book is being published in September, so a reveal in June would be perfect.

Kevin gripped Jilly's coat and his voice became little more than a whisper.
"I'm cursed, Jilly. Everyone who looks after me dies in a fire, or someone they love does. I don't know how to stop it."

When Rev. Alistair Roberts adopts Kevin Alderman, he dismisses any reference to the boy's curse. But as the pair spend more time in one another's company, it becomes apparent that Kevin is not the only one with a bitter past.

If you're interested in being the only blog to do this cover reveal (yes, that's exclusive, folks!) then please get in touch by emailing the_team@crowvus.com