November 21, 2019
Thursday 21st November - Night Vision: Writing Night Scenes
When I’m looking for inspiration for my writing, one of the best times of day is when I'm walking the dog. Not so much at the weekends, because then I walk in broad daylight (which is fantastic in its own way), but weekday nights. Last night, I got home from work early and celebrated having an excess of energy by taking Orlando out on one of the longest town walks he's had in a long time. When I'm out walking the dog in the dark, I find that complete extracts of stories just seem to come to me, or I'll suddenly work out whatever I’ve been struggling with for a while. 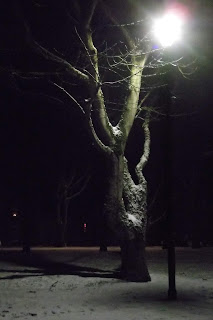 I remember walking through Wick in early December last year and passing a house where they had their Christmas lights up. It’s not far from where we live and they always have tasteful fairy lights in the window at Christmas. As I walked past in the anaemic streetlight glow, I realised that the lights weren't the only decorations: outside the door, there were the remains of Halloween pumpkins. The strange juxtaposition of the two festival symbols in the darkness was an atmospheric sight, and the flash of inspiration which followed it was one that you just can’t get in the daylight.
If you're inspired by the darkness then it's easier to bring darkness to life in your work. Darkness doesn't need to be scary, but I think it does lead to a kind of heightened reality. It’s like that widely held theory that blind people have a greater sense of hearing or sense of smell, as though the loss of one sense automatically generates an improvement in another one. Although I don't think it's necessarily as simple as that, I have experienced a greater sense of perception and understanding in times when sight, that dominant sense, is compromised.
The first time I saw the Milky Way was during a big power cut, but there are still places in our country (and certainly across the world) where you can experience this on any clear night. When writing, we have to think about what darkness has meant to people: now and for millennia. A lot of us now live in a world of light pollution. Even if we are out of the town, we are at least staying close to habitation. I used to work in a designated dark skies area and, having had that experience, I would strongly recommend that anyone writing a night scene takes the time to visit a place where you can explore real darkness.
There's a chapter in Dance With Me when the main character Kelli walks away (I would say “runs away”, but it's not quite that dramatic!) and walks through the darkness. I enjoyed exploring her realisation that, because she's in this world which is essentially the past, the darkness is something very different from what she experienced growing up in the 21st century.
Walking in the dark without any real pressure is a great way to bring on a surge of creativity. The things you notice in the dark: the smell of smoke; the sound of the sea; the all but silent comings and goings of people quickly dashing inside to get away from the cold… These are things you just don't notice as much in the daylight when your vision is almost a bombardment on the senses. So store it up, and create in into a piece of writing where the magical, mysterious environment can be conjured up in a way that not only shows your inspiration, but creates inspiration for your readers.