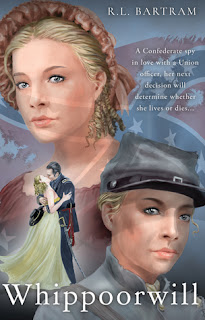 "Barely fourteen, Ceci Prejean is a tomboy running wild in the hot Louisiana summer. After breaking the nose of a local boy, her father decides to enlist the aid of Hecubah, a beautiful Creole woman, with a secret past, who takes Ceci in hand and turns her into a lady. Now, eighteen-year-old Ceci meets and falls passionately in love with a handsome young northerner, Trent Sinclaire. Trent is a cadet at the West Point military academy. He acts as if he knows Ceci. They begin a torrid affair, even as the southern states begin to secede from the Union. Only weeks before their wedding, the Confederate army attacks Fort Sumter and the civil war begins. Trent is called to active service in the north, leaving Ceci heartbroken in the south. Swearing vengeance on the union, after the untimely death of her family at the fall of New Orleans, Ceci meets with infamous spy master, Henry Doucet. He initiates her into the shadowy world of espionage. After her failure to avert the catastrophe at Gettysburg, Ceci infiltrates the White House. There, she comes face to face with Abraham Lincoln, a man she’s sworn to kill. Forming a reckless alliance with the actor, John Wilkes Booth, she is drawn deeper into the plot to assassinate the President of the United States. A Confederate spy in love with a Union officer, her next decision will determine whether she lives or dies..."

This was a book of many moods! We got the dreaminess of the wealth in the south, the passion between the main character and her love interest. We also got the anger and hatred that a war brings. What is excellent about this book is that the author manages to put across each of these emotions so artfully that the main character becomes not just 3D, but 4D! If that is somehow possible!

The author lovingly describes the settings in the book, and the time period that he must have researched avidly. I always admire somehow who can write historical fiction because there is so much research involved and one little slip-up is catastrophic. The author made the book so believable that I started to wonder if the bird-spies really did exist. Was Henry Doucet a real person? He certainly seems so!

When I first started reading the book, I wondered if it was going to become a bit of a "Gone With the Wind" which I view, incidentally, as hours of my life I won't get back. I was pleasantly surprised when the book turned out to be more entertaining and a deeper story-line than that frivolous nonsense.

There were a couple of things that jarred with me, however. Firstly, and I know this is down to me and no-one else, but I just didn't like any of the characters. I found them all incredibly irritating but, I know that if I gave this book to someone else, they could think the complete opposite. My sisters and I are like that - we have different favourite characters and a character who my sister adores often really annoys me. It's what makes reading so enjoyable, and writing so difficult.

Another thing is the casual domestic violence. Now I know that it is probably very accurate to the time and place but it really grated with me. I think Trent was portrayed very badly in this respect, and Ceci was portrayed badly because she positively encouraged it. I'm not sure what that says about her character but I don't think it's a good thing.

On the whole, however, this was an enjoyable novel which took me through one of the most heartbreaking times in American history.