September 03, 2018
I logged on to the Crowvus Team email for the first time in a few days. After being accepted to join the Indie Reviewer's List, I have received many, many more book review requests so I thought I ought to get down my reading list... 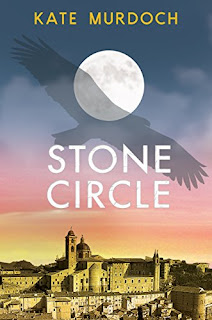 "Is the Ability to Read Minds a Blessing or a Curse?
When Antonius’s father dies, he must work to support his family. He finds employment as a servant in the Palazzo Ducal, home of Conte Valperga. Sixteenth-century Pesaro is a society governed by status and Antonius has limited opportunities.When a competition is announced, Antonius seizes his chance. The winner will be apprenticed to the town seer. Antonius shares first place with his employer’s son.
The two men compete for their mentor’s approval. As their knowledge of magic and alchemy grows, so does the rivalry and animosity between them. When the love of a beautiful woman is at stake, Antonius must find a way to follow his heart and navigate his future."
The first thing that struck me about the book was how much I liked the cover. It's simple, uncrowded and professional-looking.
But that aside...
The book begins with an insight into the main character, Antonius, and we are eager to know him better. The family background is handy because it comes in later in the book, particularly regarding the plot with his brother.
We are guided to genuinely care about most of the characters, particularly Antonius and his mentor, and we feel their pain as they face challenges through the book. The antagonist is a vile bully who, like all bullies, is a coward who preys on the helpless. The author portrays him very well, while also encouraging a small slither of sympathy towards him, but this is soon put out after a particular occurence.
I found one part of the story very hard to bear. Without giving spoilers, it's difficult to describe, but the author portrays the heartbreaking plight with sensitivity and care.
When discussing the latest stories with Crowvus authors, I insist that the 'baddy' gets their just comeuppance. This is more important the nastier they are. I feel that the antagonist in "Stone Circle" does not get his just deserts. At best, it is left ambiguous whether he will or not after the story has finished. I find this part of the story quite disappointing.
Overall, however, I enjoyed reading "Stone Circle" and I'm sure we will hear much more from the debut author as the years progress. The writing flows well and before you know it, you have come to the end of the book after travelling back to Renaissance Italy.