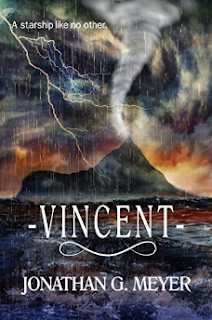 "On a remote Caribbean island, far from the eyes of the world, a battle will be waged.A small group of ordinary people fight to prevent the destruction of our planet, from a device meant to be the savior of another. Used on Earth, in a methodical way, the alien machine will cause irreversible harm.
Four unlikely heroes: a homeless man, a museum guide, a refugee, and an alien spacecraft will battle against the powerful forces of money, politics, and nature.
If the ship's recruits fail the mission, two worlds will face unnecessary hardship -- and an accelerated loss of life.
The future of both worlds rests in their hands."


This book is available here.


I've not read much Science Fiction. I don't know why because, whenever I delve into the genre, I really quite enjoy it. I love watching Sci-fi films and, when I read any book, I enjoy watching it as a movie in my head. I'm sure most people do this with a good book.

I enjoyed reading this book. I enjoyed the subtle humour, the development of the spaceship as a character, and how we were introduced to the main protagonist. I like that the hero was introduced as a man who became homeless. Not enough heroes begin their journey as vulnerable in this way. Yes, many characters go through vulnerable stages but it was pleasantly refreshing to see a homeless man as a main character. These social statements should be made more in literature. Inspired idea, author!

As I said, the humour was done well. It was consistent but secondary. It didn't take over the book as sometimes happens. Most of the humour was centred around the spaceship's inexperience of mankind. I enjoyed that the spaceship was a main character. It was an unusual but clever line in the story.

I felt, however, that not enough was done to develop all the characters. I wanted to learn more about them - why they thought how they did, and how did they deal with difficult situations in their cool and calm way? Some development and explanation would have been very welcome. That being said, I appreciated that this story wasn't a 700 page epic as often happens with Science Fiction!

Well, I'm off to find some more Science Fiction books I might enjoy. Thanks, Jonathan G Meyer, for encouraging me to read more books in your genre.