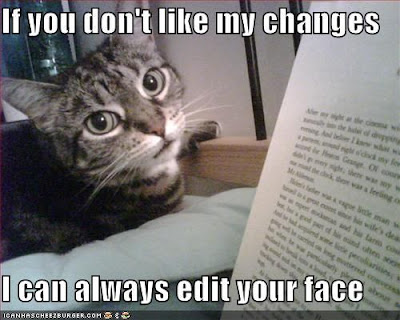 One of the things that is a real privilege about being from a family of writers is having the opportunity to read raw, unedited first drafts. There is something very exciting about how those first thoughts and forays into a deep, rich imagination make the transition from brain to paper (or screen). I’m told that I’m bad for laughing at the mistakes that people make, and a first draft is always a great opportunity to do that too! The best example was almost certainly one of my own:

High Fantasy novel I wrote as a child/teenager/young adult: The king was returning from a big battle and about to enter the capital city with his annihilated army. Naturally, he was concerned, so he said, “how can I tell them that their sons and fathers will be returning?”

So, since then, I’ve been known for missing out “not”s in sentences.
Of course, when you have passed that exciting First Draft Stage and you’re beginning to look at preparing the book for going out into the wider world, the first edit that you need to do is going to deal solely with proofreading. All the accidentally hilarious bits have to go, and you’re left with a manuscript which is much more like what was originally intended. I would suggest that you really need the work printed for this, although it can just be on a standard printer and look like a big pile of A4 paper.
The following edits will be more contentious. For these, I strongly suggest getting a book bound so that the editor (whether professional, semi-professional or amateur) can experience your manuscript as a book. These will be content edits, although they will also get into the nitty gritty of things like sentence structure. With Crowvus, I have done a few of these edits, and the books that I edited are kept as treasure trove: this was the moment where an amazing story by a talented writer was turned into an actual book. I always say “one day they’ll be worth something”, but really they’re worth something now: they are timecapsules!
The conversations which stem from these edits is where your editor needs to have a relationship with the author which allows for frank conversation without descending into arguments. Anything that the editor suggests, the author needs to either agree with or else provide a strong reason why it should remain the same.
Remember, authors: the editor has their own view of your story too. I remember editing Beneath Black Clouds and White, having already edited Day’s Dying Glory and read two other manuscripts in the same series. For those who don’t know, Doctor Fotherby features heavily in them. I was nearly at the end of editing the book when suddenly the author wrote something about his “dark hair”. Hold on, wait a minute and hold your horses! I was most indignant about this: I had always imagined the good doctor to be fair-haired (I think, in my head, I based him on someone I knew from work!) and being told I had got his physical appearance wrong at this stage was just too much! Probably unsurprisingly, given how tenacious I am, this was removed from the book.
Being an editor is a tricky business, but working with authors to edit their work is one of the most rewarding things you can do in publishing. If you find yourself on this side of the manuscript, be prepared to make your author see their work in a way they hadn’t realised. I don’t believe in the “author is dead” theory, but they are certainly not the only ones whose imaginations are invested the fantastic manuscripts they have written.