April 06, 2020
This fine #IndieApril, we are featuring independent businesses on our blog. These could be indie authors, indie publishers or indie booksellers. The independent community has a lot to offer the literary world, and we would like to show you the startling skills and talents of these indie heroes! 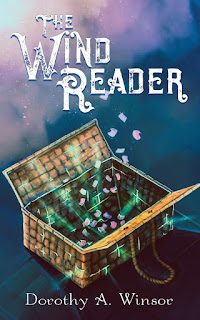 Blurb for "The Wind Reader"
Stuck in a city far from home, street kid Doniver fakes telling fortunes so he can earn a few coins to feed himself and his friends. Then the divine Powers smile on him when he accidentally delivers a true prediction for the prince.
Concerned about rumors of treason, the prince demands that Doniver use his "magic" to prevent harm from coming to the king, and so Doniver is taken--dragged?--into the castle to be the royal fortune teller.
Now Doniver must decide where the boundaries of honor lie, as he struggles to work convincing magic, fend off whoever is trying to shut him up, and stop an assassin, assuming he can even figure out who the would-be assassin is.
All he wants is to survive long enough to go home to the Uplands, but it's starting to look as if that might be too much to ask...


1.       “The Wind Reader” has a heap of 5 star reviews on Amazon. You are praised for your strong moral characteristics that run through your book (honour, bravery, friendship, loyalty). Which would you say is the most important characteristic, out of these four?

I had to think a bit before I could choose the most important. Bravery and loyalty are valuable, but you can be brave in committing cruelty or loyal to a person who does harm. Friendship helps us survive the tough times, so it’s nice, but other things can outweigh it. So in the long run, I come down on honour. For me, honour means figuring out what you think is the right thing to do and then doing it, even when it’s hard or unrewarding. I can create good stories from characters’ struggles to live by their own codes of honour, if I make it hard enough for them. You never want to make things too easy for your characters, poor things.

2.       You have also been commended for writing books that keep the reader engrossed. What advice would you give to other authors on how to do this? How do you keep your reader engaged?

If I knew and could explain how to make characters engrossing, I could probably make a lot of money! Oh wait. I just accidentally reworded the question, which asked about making books, not characters, engrossing. Maybe my writer backbrain was trying to answer without my realizing it. The theory I write by is that a good story is about the characters. Plot is important and it’s harder to write plot than most people realize. But plot is mostly a vehicle that allows the characters to strut their stuff. The plot happens the way it does because of what the characters do. If the characters reveal themselves to be people we care about, then the book is engrossing. Mind you, this is just my opinion. There are obviously different kinds of books, and they don’t all have to work the same.

3.       “The Wind Reader” is a Young Adult book. Is this your preferred age group to write for? Do you enjoy reader YA novels?

I do like writing YA. I used to teach university and I find young people interesting. They’re doing so many things for the first time, and those things are often really consequential. They choose careers or mates, for instance, and their choices shape the kind of people they’ll be for years to come. That takes bravery. What’s more, since nobody ever grows up completely, most readers can identify with those struggles if they let themselves.

4.       So, you keep a writing journal for every book you write. Are you a messy journal keeper, or a neat bullet-journal type? Do you also write sections of stories by hand, or do you always use the computer? Ok, that was kind-of two questions. But they were linked!

I am a very messy journal keeper. I scribble whatever I’m thinking about so I don’t forget it. I’ve been admiring neat, bullet journals I see online, but I could never do that.
I draft by hand mostly because it’s slower, which turns out to be about the right speed for me as I think up a story. If I draft on the computer, I get to the end of the sentence before I’ve thought of the next one, and then I’m distractible and decide it’s a good time to read twitter.
It’s important for me to be messy before I have to be neat.

I’m not sure I believe in inspiration if that means something that comes from outside and works almost like magic. What keeps me writing is habit. I’m like Pavlov’s trained dogs. I write at the same time and the same place, and eventually, my brain learns that at this time and this place, writing is what we do.

7.       So, you have a new book “The Wysman” coming out in June this year. Good luck, and huge congratulations! Could you tell us a little bit of what the book is about?

THE WYSMAN follows Jarka, one of the street kids from THE WIND READER, as he moves into the castle to use his wind reading talents to be an advisor to the king. Obviously, his life is better than it was on the streets, but he can’t forget the suffering of the kids he knew there. So when streets kids start to disappear, he’s driven to investigate, even when it looks like a nobleman is responsible and the king tells him to lay off. I love Jarka. He likes to think he’s cynical, but he can’t help caring for helpless people. Which brings us back to honour, I think. He chooses to live by his own code. Sometimes that’s a struggle, but he does it.

Thank you Dorothy for these brilliant answers!

You can find out about Dorothy by visiting her super website and blog:
http://dawinsor.com/blog/